At about 9:45pm last night, something completely out of the ordinary happened.

It was after a date at Gold Class with my boy, while we were finishing off our night with a few games in Timezone, when a man whom I had never met before reminded me that despite all of the terrible people in this world, there were actually still a few good ones out there.

During the middle of a rather serious ‘bowl the ball down the alley and try and get the highest score’ competition, a single man who appeared to be watching us caught my attention. It was his body language that I noticed at first and as he came closer, I found myself feeling a little uneasy. He stayed watching us for a little while longer and by this point, I was becoming uncomfortable. As far as I knew, he had done nothing wrong and yet the feeling in the pit of my tummy was telling me otherwise.

Eventually, he approached us and I took a step back, allowing Boyfriend to do the talking. As it turns out, he was standing around watching us because he wasn’t quite sure what to say. He was feeling far too nervous to approach us, yet all he wanted was to offer us his playing card. He had put twenty dollars on a playing card at the beginning of the night but had since changed his mind. He had only played three games in that time and was insisting that we play out the rest.

He went on to tell us that he was by himself and wasn’t overly enjoying it and that from what he saw, we appeared to be having much more fun with it all. We of course said thank you, but continued to explain that he could instead take it home with him and bring it back another time. He shook his head and he smiled, still insisting that he would prefer it if we used it instead. Then just as quickly as he had approached us, he was gone again, leaving Boyfriend with an extra playing card and leaving me feeling completely ashamed of my judgemental first impressions.

There he was, a lovely young man who was going out of his way to do a kind and selfless gesture and there I was, immediately thinking the worst of his awkward behaviour. When in actual fact, he was nothing like I had first thought and as it turned out, his awkward behaviour was well and truly warranted. He was just a normal, kind hearted man, who like most of us, was a little nervous at the thought of approaching a pair of complete strangers.

It was then, in that exact moment, that I started thinking. I didn’t set out to think the worst in this person and yet it almost happened instinctively. Somewhere along the way, something had changed. When had I stopped searching for the good in people and started assuming the worst?

Although we may not realise it, all of the terrible things that happen in this world, regardless of whether they may or may not impact us directly, still have a way of affecting our attitude towards life. Just as all of those terrible people out there, regardless of whether we may or may not know them personally, still have a way of altering how we perceive the world.

Society has a way of forcing us to believe the world is a negative place and although in reality at times that may very well be true, that doesn’t mean we should allow it to change the way in which we live our lives.

Although there may very well be terrible people in this world, for every one terrible person that we may meet, there is still at least three beautiful people out there, who perhaps we haven’t met yet. People who truly do mean well, but people we too often overlook because we’re always so busy assuming the worst.

Last night, I met one of the beautiful ones. One of the ones who truly do mean well. Last night I came across a man, who despite all the terrible people in this world forcing us to lose all faith in humanity, reminded me that beautiful people really do still exist. One single man, with one simple random act of kindness, who reminded me that maybe the world really isn’t such a bad place after all. 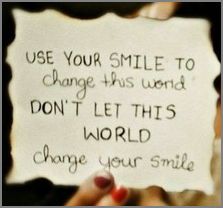