When it comes to people, you can never really be certain just what you’re getting yourself into. Even when you think you know a person, life has a way of surprising you.

There are those people who come into your life at the exact moment you need them most and almost instantly you connect. From the very second you meet them, you know that it’s lasting. Regardless of how it all happened, you know that this person is going to be a big part of your life, for as far as you can see and chances are, you are probably right.

Then there are those people who come into your life for just one single moment and just like that, they’re gone again. Almost like a Guardian Angel sent from above, there to guide us through something that maybe we weren’t strong enough to go through on our own. Then, just as quickly as they appeared they leave again, taking with them a small piece of our hearts.

Sometimes though, there are those people who do.

In the end, I guess all we can ever really do is cross our fingers, close our eyes, trust in our hearts and hope for the best, because even when those people we never thought would let us down end up proving us wrong, there will always be at least one Guardian Angel waiting just around the corner, standing there with open arms ready to lift us back up again. 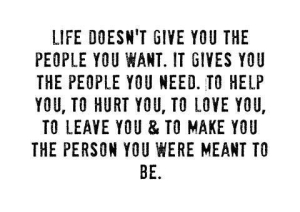