I’m going to be honest, Christmas has well and truly snuck up on me this year. Believe it or not, despite the twelve month warning and the sea of red and green, I didn’t quite see it coming.

It wasn’t until early this afternoon while I was busily searching online for a few last minute gift idea’s, that I realised just how close Christmas truly was. Sadly though, the realisation that soon followed wasn’t quite as exciting; given that Christmas was now just seven days away, the chances of ordering something online and having it arrive in time for Christmas were fairly slim and so just like that, it appeared that perhaps I wasn’t quite as organised as I had previously thought.

Regardless of my recent realisation however, I decided to continue on with my last minute search. After all, what was Christmas without a few Christmas miracles?

Tonight though, as I removed the million and one safari animals that were covering my bed, I noticed an overload of butterflies floating around in my tummy. Butterflies that had a distinct Christmas spirit about them and despite my best efforts to control the excitement, hours later, I was still wide awake, smiling from ear to ear.

Christmas has always, always been a favourite, for as far back as I can remember; a trait that I undoubtedly inherited from my Mumma. Ever since I was old enough to understand numbers, I found myself counting down the days. I would begin in January and I would count all the way through to December 25th, because along with my overly excited Mumma and probably the rest of the world, I really just couldn’t wait for Santa to arrive.

Now though, given that most people would consider my life to be somewhat of a ‘holiday’ all year round, I seem to have lost track of the days a little bit, causing December 25th to come around slightly quicker than usual and my Christmas excitement to come all at once.

Perhaps it was the million and one Christmas presents filling our house; finally all wrapped up.

Perhaps it was because I had finally finished ordering the very last of my surprise Christmas gifts; gifts that just like every other year, I couldn’t wait to hand out.

Perhaps it was because my little mind had wandered off to the thought of just what it was that Santa would be leaving out under that Christmas Tree this year, my favourite part of all.

Perhaps it was the thought of a Christmas a little more exciting than the last; a Christmas where I would be happier, healthier even.

Perhaps it was all of those things and much, much more.

Whatever the reasons behind it were though, it certainly made me smile. So much so, that even at 11:55pm, the sheer amount of excitement was making it almost impssible for me to fall asleep. Considering that this happens every year though, I suppose I shouldn’t really be surprised.

Perhaps I should use this as practice, because really, we all know that come Christmas Eve, this little girl is going to be laying in bed wide-eyed and unable to sleep. She’ll have the biggest smile spread across her face and the craziest butterflies floating around in her tummy. She’ll be more excited than any other day of the year and she’ll be counting down the hours until morning, just so she can reach down and peek into that fat little overflowing stocking of hers, because even at twenty-one, Christmas is still as wonderful as ever.

The people, the food, the presents, the smiles and the promise of enjoying it all over again, in a matter of just 365 days; what more could a girl ask for? 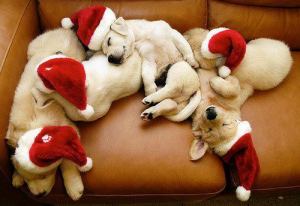